About our farming charity

We coordinate the goodwill of the agricultural community to help UK farms hit by extreme weather events or Acts of God.

This help is often in the form of emergency forage and/or bedding delivered to wherever it is needed. The forage and bedding are donated by fellow farmers from across the UK, the haulage is also offered voluntarily and our regional coordinators work to bring these together and assist on the ground.

We work closely with Farming Help including The Addington Fund, Farming Community Network (FCN) and Royal Agricultural Benevolent Institution (R.A.B.I) and RSABI who are also supported by the Princes Countryside Fund.

Someone put me in touch with Forage Aid. They rang me and said they’d send some help. Michael, Derbyshire

Forage Aid was established in March 2013 by Andrew Ward MBE, an arable farmer from Lincolnshire, when he decided to help farmers hit by huge snowfalls across Wales, Cumbria and North Yorkshire.

In February 2014 another acute forage crisis occurred in Somerset when floods hit and 1000 cattle, 2000 sheep, 150 Horses and 100 homes and their pets were evacuated – a situation that was to last three months. Thanks to national press coverage within a few days there were pledges of forage and bedding being made. Affected farmers James and Jenny Winslade were trying to coordinate this help, along with Rebecca Horsington, the NFU and the nearby Sedgemoor Livestock Market. Ed Ford on behalf of Essex Young Farmers Club made contact, and Andrew Ward made contact quickly and became involved.

These individuals came together to form an action group which included key stakeholders such as NFU, FWAG, RABI and FCN, as well as many national and local businesses.

In total, more than 30 Somerset farmers received help in the form of 200 delivered loads with an estimated value of £350,000.

Since then, Forage Aid has continued to respond to calls for help from UK farmers whose livestock are in crisis due to extreme weather or Acts of God. Read about our involvement in the 2019 North Yorkshire Floods, and how we worked with local farmer Doug Barningham to help get his farm back on its feet, and about how our regional co-ordinator Graham Hogg helped farmers hit by the 2016 Cumbria floods.

A charity that supports farmers in the United Kingdom with a Defra holding number, whose livestock has been affected by an extreme weather event or Act of God, by providing forage/bedding to those in need. 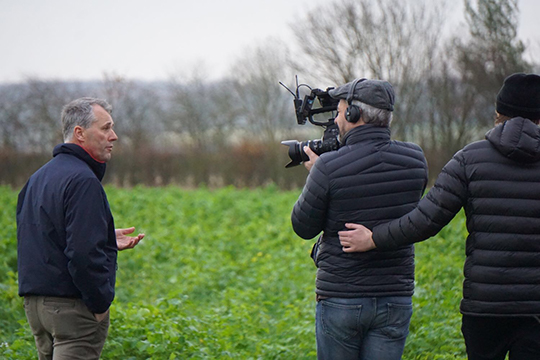 Catch up on the latest news from Forage Aid